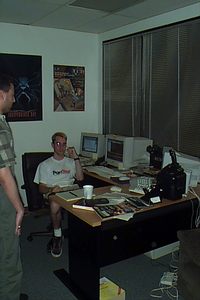 "Directed development of a multiplayer matchmaking and chat system using Windows networking and client/server technologies. Created a system for uploading scores from a children's game to a website where the scores would be recorded and ranked. The score uploading system became a popular feature, bringing more value and repeat gameplay for users as well as increased web traffic to the company's website. Worked on various gameplay elements such as AI, UI, and special effects for several PC action titles."--Resume description on Monolith role

"Software Engineer with over 17 years experience in designing, developing, and managing software projects for the consumer electronic markets as well as the home entertainment industry. Experienced with developing embedded software applications and PC-based tools for both local and international markets. Produces good software that meets customer requirements in a timely fashion. Demonstrated ability to manage project development from design to deployment as well as produce new and innovative solutions to customer issues. "--Linkedin profile

"[The AI is a] finite state machine with state transitions occurring through the computation of various input and stimuli against several tables of fuzzy logic values."--Scott Schlegel