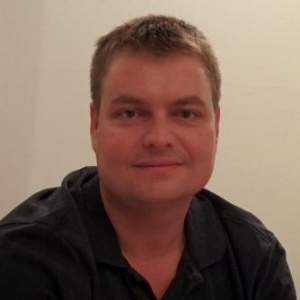 "The engine that Wolfenstein II was designed around was an enhanced version of the original Wolfenstein engine, which had texture-mapped floors and ceilings. Tom enlisted the aid of Mark Dochtermann to build a new engine that would expand the capabilities of the game while using the current artwork. The new engine included support for multiple heights (such as three-story buildings), translucent walls (sheets of glass), and light sourcing. While the final engine wasn’t quite up to par with Doom (walls had to be at right angles and the graphics tiles were bigger), it did have a couple of things that Doom didn’t, such as bullet marks on the walls and support for more network players."
--Apogee Software: When the sultans of shareware went retail, Gamasutra

Mark Docthermann wrote the network layer and setup for Blood alongside Nick Newhard. In the broader gaming community he is best known as the person behind enhancing the Wolfenstein 3D engine for the original Rise of the Triad, which mostly involved creating extended spaces in the vertical axis that produced some of the earliest level-over-level effects in a 2.5D game engine. Since working for Apogee Software/3D Realms (Duke Nukem 3D, Terminal Velocity) he joined fellow Blood contributors Jim Dosé and Richard Gray in forming Hipnotic Interactive (Quake: Scourge of Armagon), later Ritual Entertainment (SiN, Heavy Metal: F.A.K.K. 2, Blair Witch, Volume III), and eventually bought out by MumboJumbo (Snowball Run, Myth III: The Wolf Age) which he founded in 2001 with Ron Dimant. He has also worked for Electronic Arts (Medal of Honor series), Black Isle Studios (Icewind Dale) and BioWare Corporation (Baldur's Gate II: Shadows of Amn).