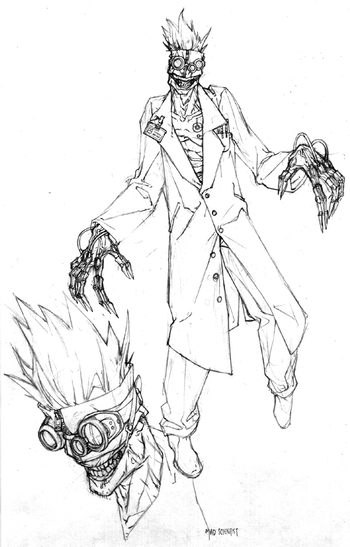 The Mad Scientist is a character/enemy in Blood II: The Chosen. Judging by the descriptions on the Blood II official website, this was meant to be a more common character/enemy, given the official description uses "they" when referring to it. In the finished version, the Mad Scientist acts as a companion to Gideon, and appears in the CabalCo building's R & D division.

The Mad Scientist is the head of CabalCo research, scientific and otherwise. To improve performance, he has undergone surgery to replace his eyes with microscopic lens implants and analyzation tools. His hands are replaced with robotic ones which increase speed and ability to interface with computers. His brain is also given alterations "too numerous to mention" at the cost of many unnecessary functions. The process leaves him insane and dedicated to the Cabal.

They receive no military or combat training, and will cower from an aggressor in a fight. However, they never miss an opportunity to experiment, and turning over an unwilling individual to them is a surefire way to extract needed information or support.

Throughout the game, the mad scientist appears with Gideon and his bodyguard Prophet, and refers to himself as "Doctor". He is the mastermind behind the Singularity Generator, which appears to be causing the tears in the cosmic string. In a deleted scene, he tries to warn Gideon that even though the rifts may be a source of unlimited power, they may also be deadly pitfalls in the cosmic string, leading to a realm of pure evil and chaos.

He eventually meets his end in C3L7: Research and Development. Upon entering, the mad scientist taunts Caleb and asks him to move forward to "the experiment". Caleb wanders through the level, encountering terrariums full of Shikari, and eventually meets him on a platform control booth above a thresher. The mad scientist immediately turns around and cowers in fear, much like a Civilian. Killing him or not renders no apparent consequences.

In the developing Russian fan game Project Bloody Murder, the Mad Scientist (who is given a proper name, Dr. Pretorious) survives the events of Blood II. He leads the opposition to Caleb, who takes over the Cabal and advocates the return to its antiquated occult ways. The Mad Scientist leads a group of Cabalco engineers, scientists and managers, renounces Tchernobog, allies himself with the remnants of the world's nation-states and creates the New World Government, the faction that opposes the Cabal's bid for world domination.