This is a list of Blood fan artwork, to see all of the fan art images uploaded onto the Blood Wiki see the "Fan Art Image Gallery". 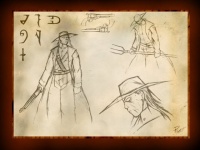 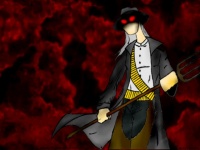 The Chosen Wallpapers Hosted on the Blood Wiki

A comic strip starring Caleb drawn and written by Björn Wehrhan. It depicts his battle with the DC Comics character "Lobo" and shows how Caleb deals with one that can not die.

Caleb versus Lobo Hosted on the Blood Wiki

A comic strip written by Rust for Halloween 1999. Once returning home from the realm of the Ancient One (with Ishmael staying behind) the Chosen settle down in Gideon's former estate. Things turn bad however when the Cabal attack, with Tchernobog reincarnated. The story is intended at humour.

Tales of Blood: Everyday Life Hosted on the Blood Wiki

Tales of Blood: The Hunt[edit]

Another comic created by Rust. In a dark meeting of a Cabal chapter a plot is created to slay the Great Betrayer, until the man himself comes to the meeting. The elder has a trap to spring. The comic ends with "To be continued" although it never was.

Tales of Blood: The Hunt Hosted on the Blood Wiki

The Crypt Fan Art Contest was hosted in 1999 and is now hosted by Planet Blood. The winner of the contest was Evil Eyes Caleb by Magna-Man with 15 total points, it depicts Caleb. The runner up picture was the comic Bad Day by Björn Wehrhan which is a two page comic strip. There were twenty one total pictures submitted by twelve people.

Guy in a Trench Coat[edit]

A fan art sketch depicting Caleb at Miskatonic Station by Andrew Worbel (Slink) for his fan poem Guy in a Trench Coat.

Assorted fan artwork created by the users of the site Planet Blood.

These files are claimed to exist by Planet Blood but do not having working displays or links. After the names and list of images afflicted it says which versions were affected (as some only have a missing version). If you have a copy of any of these files at any quality please send them to this email address: glw@linuxmail.org. Images that normally would have been in other categories are listed bellow. We would like to thank the Internet Archive and its "Wayback Machine" for allowing us to recover much of the original list of missing art.

Various pieces of Blood fan artwork submitted to the deviantART website by its users. These images were created by numerous individual artists, all over the world, of all backgrounds, and off all genders. There only link is there theme and their host, and there is a rich variety in styles and types of the work submitted (including two Tchernobog sculpted masks!). The Blood Wiki came across these images in late June 2009 but they were not submitted to the "Fan Art Image Gallery" until July 30, 2009.

On May 14, 2010 a group was founded on deviantART to cover and better organize the Blood fan art there, and its greater moderation allows us not to feel the need to archive them as stringently on the wiki.

The group was founded by Chase "DemonTomat0" at a friend's suggestion. 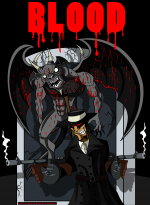 A video digital speed-painting of Caleb by Diego Velázquez to the song "Climbing Up The Walls" by Radiohead.

The Blood Comic by JackieTheFox depicting the casting down of the Chosen by Tchernobog at the beginning of Blood. 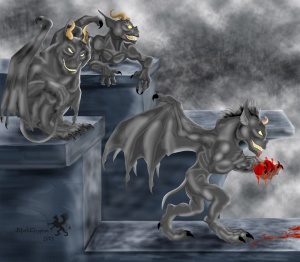 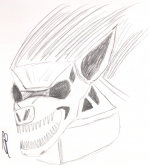 A fan art sketch of the final boss in the Plasma Pak created by Fresh_Meat released between July 31 and August 2, 2006.

A variety of desktop wallpapers derived from screenshots of Blood, many modified but some just plain screenshots. These were created by Mikq2 and posted on the Transfusion Forums on March 21 2008.

Multiple fan wallpapers for Transfusion, the first two included Caleb and a moon silhouette, the next one contained a gothic woman in skimpy attire. They were all made by Dimebog. In response Hellen made a sketch that depicts an actual blood transfusion in gory detail and Caleb_2k made a wallpaper featuring the Blood hand logo. Slink and Willis made their own edits to the image.

Fan artwork created by RedFanatic and Hellen in the "Drawn in Blood" thread on the Transfusion Forums. RedFrantic drew four different sketches of cultists and one of Caleb. Hellen drew a picture of two gargoyles and the Grim Reaper on a row boat. Another image featured in the "Transfusion Forums Artwork" category is a work by Ransu depicting Caleb with MapleStory graphics, posted on October 25, 2007 and uploaded to the Blood Wiki on February 24, 2009. There is also a modified Transfusion screenshot featuring a Christmas tree theme, created by William "Willis" Weilep.

"Drawn in Blood" Fan Artwork Hosted on the Blood Wiki

An imitation post card collection of a player's trip through Blood II: The Chosen. It was created by zZaRDoZz (Dr. zalost) and uploaded on November 25, 2008.

Artwork by BEAST Hosted on the Blood Wiki

Artwork From The Postmortem Hosted on the Blood Wiki

A graphic of Caleb, an Axe Zombie, a Cultist, and a sign reading "JoJo" from an isometric perspective; created by Shadowman.

A thread started by Shadowman to post his artwork, with three being Blood related and the rest being mostly related to Sonic the Hedgehog.

A selection of Blood emoitcons created by Requiem as animated GIFs based on the game's sprites posted on July 24, 2006.

A collection of various Blood inspired wallpapers largely based on enemy sprites and level screamshots made by Karthik Abhirama Krishna and Varun Abhiram and originally hosted on Karthik's Blood Website. The work was found by the Blood Wiki and uploaded onto the "Fan Art Image Gallery" around January 7, 2009.

A collection of fan artwork featuring Caleb from My Sweet Passion, an even larger collection of random fan art, mostly featuring characters from anime. MSP, as it is commonly known, was created by Zarla. The work was found by the Blood Wiki and uploaded to the "Fan Art Image Gallery" around August 27, 2009; now the sole host.

A web comic by made by Shadowmanpph using sprites from Blood, lasting from to October 14, 2007 until June 13, 2009 totalling four editions.

A sculpture of the dark god Tchernobog by David Petho (Final Caleb), with work to recreate its sprites.

A collection of Blood fan art created by Michael "Mexoil/I LIKE MY HANDS BLOODY/Heromachine 2.5" Kushin, submitted to the Elfwood science fiction and fantasy fan artwork site on August 4, 2008. One is a larger closeup depiction of Caleb, featuring a red volatile background. The rest are coloured drawings of Blood characters standing, such as Caleb, Ophelia, a Axe Zombie, and a Fanatic. Singularly, these works are released under the Creative Commons Public Domain License, allowing for their free use, redistribution, or modification without any legal reprimands possible. They were found on by the Blood Wiki and submitted to the "Fan Art Image Gallery" around August 27, 2009. They are also featured in a YouTube video honouring fan art.

Artwork by Michael Kushin hosted on the Blood Wiki

An fan art poster of Caleb with lots of other features in the background. It is singular in that it was not released as an image but rather as a YouTube video showcasing various areas of the work. As such the Blood Wiki had trouble figuring out how to add it to the "Fan Art Image Gallery" it its quest to assort the most fan art as possible in one place. After months of indecision it was decided to take a sample shot of the video with an explanation and link to the video. It is the last image on the "Random Artwork" section. The poster was created by RedheadMetalC and released on October 2, 2008. He has released other non-Blood related drawings the same way, one of such videos uses "Unholy Voices" as its background track. Another presence of fan art on YouTube is a art compilation video by MEXalych.

A short comic depicted panel by panel as a YouTube video by Tekedon in a manner alike to a motion comic with panning and applied sound effects. It then shows a shot showing all of the panels at once.

A sketch of Caleb drawn out on a Wacom DTF 512 PL 512 graphics tablet in Autodesk Sketchbook Pro on Windows 8 by David Henning.

The mesh from Blood II extracted to allow Caleb to be produced by a 3D printer; by TheNight.

Collection of two drawings of Caleb meant to illustrate the Tome of Blood short stories.

This was followed by a ASCII art depiction of Ishmael made by Graham L. Wilson. It was finished and uploaded on November 21, 2008.

Based on earlier templates, on May 10, 2011 Graham released a version for Ophelia Price...

The Caleb Pumpkin was carved by Malcolm Wilson for Haloween 2010, which is also incidentally the twelfth birthday of Blood II: The Chosen.

Various Blood fan art pieces, largely unavailable anywhere else, or at least not easily accessible, created by Rust, Hellen, Filip Walgraef (oBe), Damien Azreal, various unknown people, and Dávid Pethõ (Final Caleb). They were all collected by the latter artist and he submitted them to the Blood Wiki on November 30, 2008. They were all stored in the random artwork section of the "Fan Art Image Gallery", though some non-Pethõ submitted artwork has since been put in there (under note). Some of the images submitted were later traced back to Planet Blood and moved to that site's category, but Pethõ is still noted on those images for originally bringing them to the attention of the Blood Wiki. 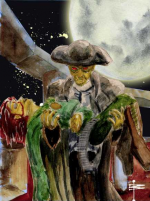