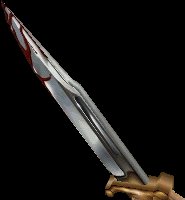 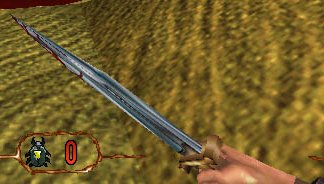 The knife is the melee weapon of Blood II: The Chosen, replacing the Pitchfork. Caleb starts with it, along with the Pistol. It is meant to be used in close combat and has an even shorter range than the pitchfork in Blood. Players with higher strength will be able to activate the knife with more speed and cause more damage. The Blood II instruction manual says that each knife has been tailored to fit each of the Chosen and that it becomes more powerful with each use, but the game dynamics don't support this. However, each of the Chosen do have a different model of knife. Caleb has a Bowie Knife, while Ishmael's has a more twisted version with a barb on the back, looking more like a sacrificial knife. Ophelia brandishes a long and thin blade, perfects for quick silent attacks, whereas Gabriella wields a more military-looking massive blade.