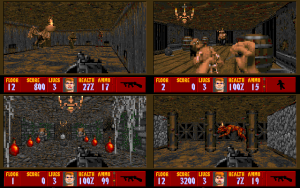 Halls of Stonehenge is a modification by Majik_Monkee for the 1992 video game Wolfenstein 3D first released on November 3, 2003. Although still set in the Wolfenstein 3D universe, with B.J Blazkowicz as the protagonist, the game borrows heavily from Blood, decorating its world with textures, sprites, music and sounds from the game. This was directly inspired by the author's older computer having trouble running Blood, while Wolfenstein 3D ran flawlessly. As such, it functions rather similarly to being a demake of the game.

The mod changes the game's weapons into those of Blood: transforming knife to Pitchfork, pistol to Sawed-Off Shotgun, machine gun to Tommy Gun and chain-gun to a "Riot Gun" derived from the Tesla Cannon. The game also adds new weapons such as the Voodoo Doll and Hell Staff. In the way that Blood TC/ZBlood can be seen as realization of what the game could have been like on the Doom engine, and Transfusion for Quake, this can be said to be the same for Wolfenstein 3D.

Caleb makes a pseudo-appearance as the basis for Draven, the game's fourth boss armed with dual chain-guns. Shial is also incarnated as Webster, and the Gill Beast stars as Death Breath; Cerberus also cameos while even retaining its original name. Finally, Tchernobog emerges as the evil Sarron. A special edition was also later released (originally with the working title of "Dead Reckoning"), with new levels and some new enemies, including a few from Heretic.