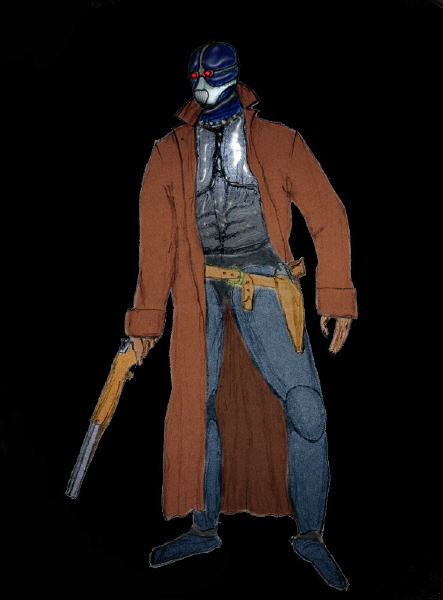 Fantasized portrait of NoOne, aka Diman, creator of Alone in the Dark which was also featured in Bloody Pulp Fiction.

"Noone worked as a trainer for the Cabal in fact he was the master trainer of hundreds of Fanatics. The facility he ran was a gigantic underground base hidden deep from prying eyes, it was large enough to support over a thousand residents and it’s corridors and rooms stretched for miles. When the dark revenge of Caleb came burning it’s was through the Cabal the Facility was fully manned and in lock down for its own protection. Unfortunately the massive power plant on the surface that ran the base was less well hidden and on his was to put Cerberus down Caleb destroyed it, plunging the base into darkness. With no power and few functioning batteries all systems quickly failed, lights, doors, air, water. Those that were trapped would have to wait for rescue. But with the chaos during the aftermath of Caleb the secret location of the base was lost and with so few surviving members of the Cabal it was likely to stay that way. It was a full year before the remnants of the shattered Cabal were strong enough to start collecting information about their previous infrastructure, and eventually they cleared the collapsed tunnel to the base. The massive doors were still sealed shut and it took days of work to cut them open, finally the doors slid open and the Cultist workers stared uneasily into the deep darkness. Only one man walked out of that abyss and quickly there after it was resealed and forgotten. It was never fully understood just how he’d managed to survive down there but when the tale was told thereafter they would say ‘Noone survived’ and the nick name stuck. NoOne left the Cabal remnants soon after his escape and now designs and sells weapons and machines of war to anyone who’ll buy. He’s cold unpredictable and fiercely intelligent and loves nothing more than to be Alone in the Dark."

This file contains media copyrighted by Monolith Productions or other third parties and is used under the terms of fair use/dealing for non-commercial purposes.

Click on a date/time to view the file as it appeared at that time.

You cannot overwrite this file.

The following page uses this file:

This file contains additional information, probably added from the digital camera or scanner used to create or digitize it.

If the file has been modified from its original state, some details may not fully reflect the modified file.