From Blood Wiki
Jump to navigationJump to search
Fanatic 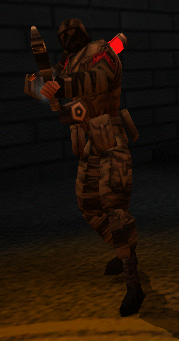 Fanatics are enemies found in both Blood and Blood II: The Chosen. The second most common kind of Cabal member, they act similarly to Cultists, but use various fully automatic firearms instead of shotguns. They have the same amount of hit points as Cultists, but their high rate of fire combined with their accuracy and numbers makes them a bigger threat, especially at long range.

"These Tommy Gun packin' keepers of the dark faith want to spill your precious life blood. Keep your ears tuned for the deadly sounds of dynamite as they sometimes offer explosives instead."--Blood Manual

Fanatics wear a black/gray robe with a blue belt. They behave just like Cultists, but their Tommy Gun gives them a greater advantage, due to its repeated fire, accuracy, and effectiveness at long range. They also appear in slightly fewer numbers. Unlike default Cultists (and contrary to the games official manual), Fanatics cannot attack with TNT bombs, except on the original 1.00 release, with a single stick.

The player character was originally going to simply be a Cultist/Fanatic, which is part the reason it has animations for crouching, jumping and swimming. In the Blood Alpha, the cultists also do not yet melt away upon death as they do in the final version. They share the same voice samples as the Cultist, only slightly pitch shifted, which have been attributed to Stephan Weyte.

"These are the special forces of the Cabal. They're better equipped and more experienced, and they possess a slightly faster reaction time. They still don't post much of a threat. Watch them, though. Occasionally, when you think you've put one down, he'll go berserk and return your attack."--Blood II: The Chosen Manual 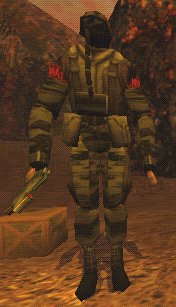 Like the previous game, Fanatics are an upgraded version of the cultist, but have a different model. They are the special forces of the Cabal - paramilitary soldiers better equipped, more experienced, and more deadly. They are faster than Cultists, and wield rapid-fire weapons like the submachine gun or assault rifle. Their lack of sanity is evidenced by their shouting, fanatically cavernous voices, phrases like "You'll die a slow, slow death!", "Come out, we won't hurt you!" and "You won't stand a chance!". In addition, the Fanatic has a suicide attack: if drained of life without being gibbed, it will collapse on its knees and scream madly while injecting itself with the red stimulant pack installed on the back of its suit. It will then run at the player and, when close enough, will detonate an explosive pack, taking itself and the player out.