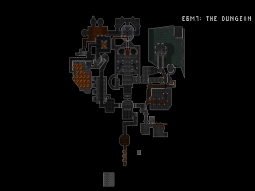 The Dungeon (E6M7) is the seventh level of Plasma Pak, an expansion for Blood, also known as Episode 6. It takes place inside a dungeon. 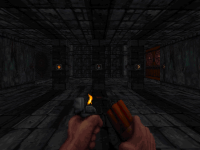 "Set the symbols in front of you to Spider, Dagger, Moon (you'll see these symbols next to the doors that open). Go down the now opened passage to your left. When the floor falls out beneath you, turn around and push the panel that will eventually be revealed. Turn around, and enter the door that just opened. Go up the stairs, and enter the room in front of you with the two Gargoyle statues. Over to your left, you'll see the Dagger key. Jump down, grab the key, and enter the doorway underneath where the two gargoyle statues were (Hmmm, wonder what happened to them?). When you get into the room with the stairs behind you, take them up. When you get to the top, two walls will open up one at a time. Kill everybody, and hit the switch in one of them (the first of three), and another wall will open. Enter the teleporter in it, and you'll be teleported to a room next to the starting position. Set the symbols to Dagger, Spider, Spider. Enter the newly opened door in front of you. To your right, you'll find a small room with a lift. Take the lift up, and follow the passage around (take note of the Skull key door), and you'll soon find the Skull key. Retrace your steps, and go through the Skull key door. Hit the switch (2nd of 3), and retrace your steps back to the starting room. Set the symbols to Moon, Fire, Dagger. Enter the newly opened door to your right, and find your way to a wooden door. Enter it, push the switch, and leave the room. A newly opened area will be over to your left. Enter it, and pull the large wooden lever. Head back toward the starting room, and you find a newly opened passage (you can't miss it, you're going to be attacked from it). Go into it, and walk all the way forward, around the corner, and up the stairs. You'll eventually get to the room with the Moon key. Grab it, and jump out the window. Go through the Moon key door, and push the final switch. Go back outside, find the stairs, and find your way back to the starting room (use the auto-map if you get lost). You'll find that another door has been opened up here, and follow it to the symbol that ends the level."--Baytor's Guide