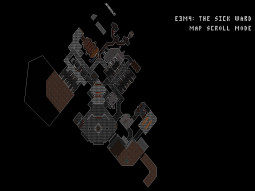 The Sick Ward (E3M4) is the fourth level of the third episode in Blood. After Caleb emerges from the sewer system, he enters a hospital populated with Cabal and their twisted version of modern medicine. 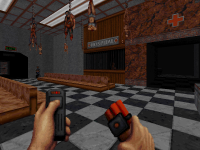 "Enter the building through the Emergency Room entrance. In the emergency room, there's a large metal door. Go through it and walk to your left. Find the information desk, enter the small room behind it, and kill the fat zombie to get the Eye key. Now just walk up the ramp and through the Eye key door. After going down the ramp, you'll see two passages, one to your right and left. Take the right path to the 'Assisted Suicide Ward', and grab the Fire key. Now retrace your steps, and take the left passage. At the end of this passage, you'll find the Fire key door. Go through it, and find the chapel. Here, you'll find the Skull key, and the entrance to the secret level. If you simply must go through the regular exit, use the lift on the other side of radiology. When you get off the lift, you'll see the Dagger key door in front of you, and the Skull key door around the corner. Enter the Skull key door, and open the metal door across the door marked 'exit'. Here, you'll find the Dagger key. So return to the Dagger key door, open it, and follow the passage to a metal door. Open that one, and you'll find the symbol to end the level. To get to the secret level, grab the Skull key (opening the curtains), turn around, and look up. Shoot the little skull, and a passage will open behind where the curtains were. Follow it, and push the symbol to go to the secret level."
--Baytor's Guide