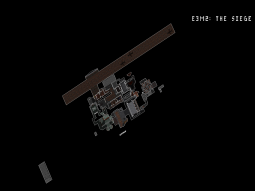 The Siege (E3M2) is the second level of the third episode in Blood. It takes place in a European town (possibly France) during an air raid. Unlike the previous episode, this level is largely centred around commercial buildings, such as a butcher shop, a bank, and several brick tenements. 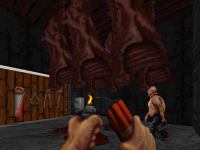 "As you enter the second room, you'll see a crack in the wall; blow it open. Enter the hole, and go down the stairs to 'Feinman Meats'. Go in through the regular entrance, and make your way forward. You'll find a passage under a 'No Admittance' sign. Go down that passage, and open the door at the end to pick up the Skull key. Go back outside, and enter through the Loading entrance (there's a hall that's quicker, but this is easier to explain). Go up the stairs, and follow the hall until you get to the Skull key door. Enter it, and follow the hallway until you get to the bloody pool. To your right, you'll see a white square (take note of this for later). Jump down to your left, and you'll find a button is a small alcove. Push it, and the white square I pointed out will now have a button. Go back to where you jump off, ride the lift back up, and push the newly revealed button. A staircase will rise up, follow it to another button, and push it. To find out "what the hell" that did, go back to the Skull key door, and follow the ledge around. There will be a newly opened door on the other side with another button. Push it, and the other door on the ledge will open. Enter it, go up the stairs, and out on the narrow ledge. To your left will be a water tower, so go over to it. When you get to it, you'll see a window over to your left. Jump in the window, kill the cultist, and grab the Moon key. Jump back out the window, and enter the door under the 'Exit' sign. Walk down the hall and shoot the TNT barrels to blow the crack in the wall. Now follow out to the roof behind the 'Monolith' billboard. To the right of the skylight, you'll see a wooden fence you can get on top of. Get as high as you can, than jump across to wall near the black and white tiled area. Now jump to the roof over to your left. To your left will be a fan. Shoot it out, and drop down into the kitchen. Take the right path, and follow it along with your right side against the wall (ignore the small area with the phones), and you'll soon find yourself outside with some innocents. Enter into the building in front of you. Follow the path to your right, and after you turn the corner, you'll see the Moon key door in front of you. Enter the Moon key door, and you'll soon see an area will lasers blocking your path. If you look behind you, you see two switches. Activate the right one (don't touch the left one). The lasers will now be deactivated. Enter the room, and you'll see something across from you with a black rectangle on it. Lob some TNT at it, and the bank vault to your right will open up. Inside the bank vault, you'll see two dials. There doesn't seem to be any combination. Just hit one of the dials a couple of times, and all of the metal doors inside the next room open up. Walk into the room, and you'll find a hole blown in the wall. Jump through, and push the symbol to end the level."--Baytor's Guide