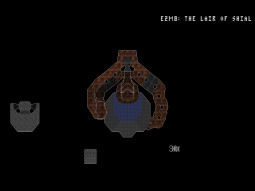 The Lair of Shial (E2M8) is the eighth and final level of the second episode in Blood. It takes place in a circular cavern that is spackled with spiderwebs, cocoons, and spider silk. This is where Caleb finds Gabriel and his killer, Shial. 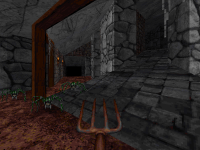 The Lair of Shial
Ending Cutscene

"You shouldn't have too much trouble finding Shial's lair. Quickest way is to jump in the water, move forward, and surface in the next area. Go up the stairs, and the stone that you see in front of you is the underside of the ramp leading up to Shial. Just circle around it, and go up the ramp. Kill Shial to end the level."--Baytor's Guide

Shial screams from inside her lair. Caleb finds her in front of a large cocoon housing the body of Gabriel. Caleb fights and defeats the mother spider, along with her ever-present spawn of red and green spiders. After the big battle with Shial, Caleb says.

CALEB: Along came a spider and sat down beside her and said: 'What's in the bowl, bitch?'

As her overturned body writhes on the floor, legs twitching, Caleb brings down his boot and crushes her, spilling green viscous fluid. Caleb turns around and approaches the hanging cocoon containing his once friend, Gabriel.

He plunges his hand into the cocoon's torso and starts digging around, as Shial's body twitches behind him.

CALEB: For truly, I say unto you, unless you eat the flesh of the son of man and drink his blood, you have no life in you.

His hands emerge from the now blood-stained cocoon, bringing with it the heart of Gabriel. Caleb lifts it up to his mouth and starts to drink its blood.

There are no official secrets in this level.

Note: This method doesn't work on Blood v1.00; so if you're going for pitchfork-start on Well Done or Extra Crispy you'll be underpowered to deal with one Shial, let alone two. Since you only need to kill one Mother Spider to end the map, make sure to lure one of them into the water then wait for Shial to reach her red/green spiders spawn limit - take advantage of the shotgun's alt fire knockback to manipulate her positioning and trap her into a corner, then unload everything at her. You'll need some pitchfork stabs to finish her but since she'll be cornered, and easier to be hit underwater, it won't take long.