E2M7: Bowels of the Earth 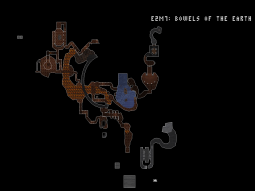 Bowels of the Earth (E2M7) is the seventh level of the second episode in Blood. It takes place deep in the underground catacombs of the frozen north. 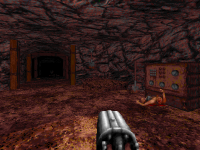 Bowels of the Earth

"As you walk into the next room, the floor will crack open. If you look down in the newly opened chasm, you'll see a passage has opened up below you. Carefully jump down into it. Follow the passage along, and eventually there will be a cave-in, and you'll be attacked by zombies. Kill the zombies, and continue along the passage using the last zombie hole to your right. You'll come to a room with a mine car with a lever in it. Jump in, pull the switch, and ride it to the next area (you can also walk, it doesn't make any difference). When you get to the next area, you'll see the rocks to your left falling down, and a ledge behind them. Jump onto the ledge, and follow it to your left. You'll eventually come to a room with a stone in the middle, two ledges on either side, and a passage in front of you. Enter the passage, and up the ramp. Follow that passage around, and you'll eventually see a passage to your left. Follow it. You'll eventually come to a large area with a wooden bridge and a hole in the floor. Jump down into the hole, and you'll find a lever in the room you land in. Push it, and follow the passage. You'll find another lever, which activates the lift. Enter the lift, push the lever to ride it up, and blow the crack in wall. Walk out into the passage, and go right. You'll find yourself in the area with the bridge and the hole again. This time, follow the steps on your left, and cross the bridge. To your left, you'll see a conveyor belt & smasher working. Jump in, and carefully make your way around. You find some Boots of Jumping, and a lever on your right of the Boots. Push the lever, and you'll see the chains start to move. Follow the chains, and use the Boots of Jumping when you get to the end of the hall. You'll find yourself on an incline, keep moving forward, and jump down. Follow the passage in front of you to the bridge, cross over it, and duck down under the boards at the end of the passage. Follow that passage (blowing up the TNT if you like) to a room with a pool. Jump in, and move through the pillars on your left. You'll find a large wooden lever at one end, and a door at the other. Pull the lever, go through the now-opened door, and follow the underwater passage. Surface, and enter the lift. Follow the ledge, jump over the gap, and follow the passage to the lift. Activate the lever, and ride the lift up. Cross the bridge, jumping over the gap, and enter the passage to the right. You'll come to a bridge with crack at the the end of it. Blow the crack (and part of the bridge). Use the Boots to jump over gap. If you don't have the Boots, you can always use the skull posts on the right side of the bridge to get across. Turn to your right, and follow the passage down to the Temple. Enter through the spider doors, and down inside. In the room with the gargoyles, there's a gray pillar. Push it, and a passage will open up. Follow it, and push the symbol to end the level."--Baytor's Guide