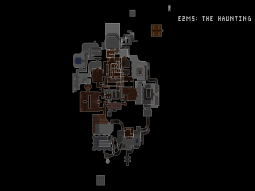 The Haunting (E2M5) is the fifth level of the second episode in Blood. The level resembles a large mansion. 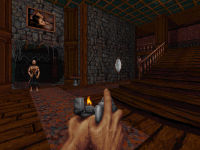 "Walk forward, take the stairs up to your right, and enter into the area in front of the house. To the right of the house, you'll find a gap in the hedges. Before entering the hedge, use Boots of Jumping to jump up into the window behind you, and collect the Moon key (you can do this later if you don't have the Boots). Enter the hedge, and follow the path along, and you'll eventually come to a fence with Dagger key behind it. Since you can't get in, just keep going along the path. Eventually, you'll find yourself in front of another part of the house. You'll find an entrance into the hedge maze over to the right. Make you're way through until you find the house. Walk up the steps and open the enter the doors. After going through another set of door, take the path to your right, and follow it until you get to a room with X-shaped planks. Shoot out the window to your right, and jump out of it. Walk up the steps over to your left, and turn right. Walk straight ahead, and go through the opening on your right. Turn the corner, and you'll see a pool with two gargoyle statues with the Spider key between them. Grab it, and backtrack to the steps. On your way to where you entered the house. Now take the stairs up, and open up the fist door to your left. Walk forward, hang a left, and you'll see the Spider key door to your right. Open it, and get the Eye key. Now backtrack, going back out the spider door, and back out the door from the hallway. Straight ahead, you'll see some railing on your left side. Walk to it, and you'll be overlooking a room with four large windows. Jump down, break one of the windows, and jump outside. Enter the hedges to your left, and follow it along and you'll find the Dagger key you saw earlier. After you get the Dagger key, backtrack to the room with the four big windows. You'll see a little room in the left-hand corner. Go into it, and open up the Dagger key door. Open up the cooler door on the left side of the kitchen, and get the Fire key. Go back in the kitchen, and go through the Fire key door. To your right is the Eye key door, enter it, and walk down the stairs to the wine cellar. Do not blow up the TNT barrel to your left. Walk to the end of the room, turn to your right, and you'll see another TNT barrel (blow this one up to find a lift which will take you back into the house if you accidentally blew up the first TNT barrel). To the right of this barrel is the Skull key. Get it, and back up the stairs, through the Eye key door. Go through the double doors ahead of you, and walk outside. If you haven't already gotten the Moon key, there's an entrance to the hedge maze over to your left. Just follow it to the Skull key door, go upstairs, collect the Moon key, and return here. So, now that everyone's got the Moon key, just open up the Moon key door across the way. Enter into the Moon key door, and jump into the swimming pool. You'll find a crack in the corner, so blow it up with the Napalm Launcher. Enter into the opening, swim along the underwater passage, and surface in the next area. Jump out of the water, walk down the passage, and blow up the TNT barrels at the end of the hall. This will open up two passages. Take the one to your left, and follow it to the symbol that ends the level."
--Baytor's Guide