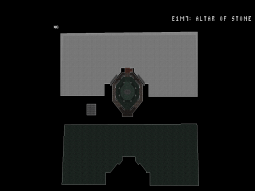 Altar of Stone (E1M7) is the seventh and final level of the first episode in Blood. It is a large, circular arena made of stone bricks, with weapons and ammo scattered around. This is where Caleb discovers Ophelia's body, and faces her killer, Cheogh. 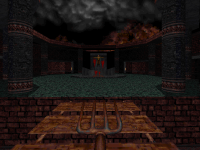 "Go up the stairs in either direction. When you get to the wooden bridge leading to the altar in the center, cross it. This will get the attention of Cheogh, and the final battle of episode one will begin. Kill him to end the level."--Baytor's Guide

Caleb starts at the bottom of the arena, facing the raised pillar on the altar. The level is designed like a circle, with one continuous set of stairs that rise and fall at the level's outer ring. Caleb climbs the stairs and crosses a wooden bridge to the altar, where he sees Ophelia's body crucified on a stone slab.

A section of the wall collapses, and Cheogh emerges. After a long, arduous fire-fight, Caleb succeeds in killing the beast.

Caleb places Ophelia's body on a stone slab. He brushes away a lock of hair and gently touches her face as he says:

He picks up a can of gasoline and drenches her body, as lightning flashes and the body of Cheogh looks on. Caleb flicks his trusty lighter and sets her body ablaze. As the funeral pyre burns, the fire reflecting in Cheogh's eyes, Caleb approaches the gargoyle, sets his shotgun against the creature's temple, and pulls the trigger.

Note: There are no official secrets in this level. However, there are some hard-to-find areas which may be of help to the player. 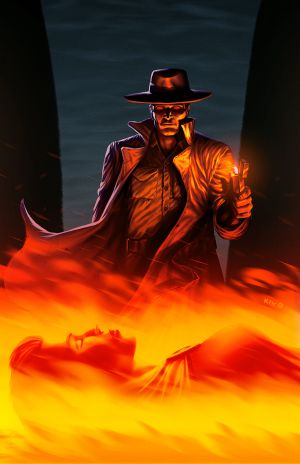