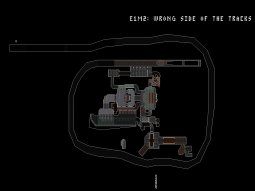 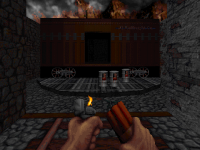 "Go through the hole, and shoot the TNT barrels to your left, blowing a hole in the rail car. Shoot the TNT barrels in the car to blow the other side to the car. Jump up in the car, walking through it, until you come to another rail car. Over on the left side is a narrow space, which will allow you to walk by it. As you come out of that space, you'll see a button in front of you. Push it, and the rail car will rotate, revealing a door on the other side of the rail car. Jump through the middle of the car, and turn to your left to see the newly revealed door. Open the door, walk down the stairs, and follow the stone path to the 'Miskatonic Station'. Enter the station, walk up the stairs, and you find yourself at a Ticket booth. Walk around it, and enter through the 'No Admittance' door. Collect the Moon key, turn around, and walk til you're just under the 'Miskatonic Station' sign, and turn around. You'll see two staircases to your left and right. Follow the left one up, open the Moon key door, and get the Fire key. Then retrace your steps, and go up the right one. Follow the passage until you get to the room with JoJo posters and the Fire key door. Open the gate, and follow the passage to the end, and wait for your train to come in. Hit the symbol on the front of the train to end the level."
--Baytor's Guide 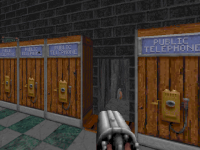 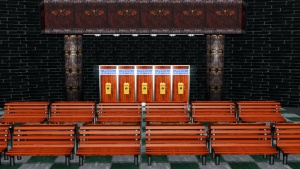