"Traveling by boat through the Carpathian Mountains to recover an ancient scroll that was taken from you, a storm rages, depositing your boat on an ancient shore. You must act quickly, as this ancient scroll is capable of upsetting the balance of power in the otherworld. Malevolent forces have detoured your journey, the same forces which were responsible for taking what was rightfully yours. You proceed to find the ones responsible for stealing your property, and disrupting your journey."--From the Cryptic Passage README.TXT

Cryptic Passage (originally titled Passage to Transylvania) is the first of two expansion packs for Blood. Unlike the Plasma Pak, the expansion was developed by the third party Sunstorm Interactive and published by WizardWorks Software, therefore it does not contain any bug fixes or new features. However, it does contain a new episode containing ten single-player maps, and four new BloodBath maps.

Caleb travels to the Carpathian mountains after he hears of an ancient scroll taken from him. This scroll is said to be capable of upsetting the balance in the otherworld, but Caleb finds himself detoured by the forces of Tchernobog and the Cabal. He must find the scroll and take out everyone responsible for interrupting his journey.

Despite not being developed by its rights holders, Cryptic Passage is still considered part of the offical Blood canon, though none of its story elements show up in subsequent games. It is set sometime shortly after Blood (with hints like the opera house showing it to be in the 1930s). It also makes reference to a portal to the "otherworld", a story thread that intersects with the main plot of Blood II: The Chosen.

Although Cryptic Passage is commonly regarded as the fifth single player episode for Blood, the episode 5 slot of the main game's INI file is already taken up by its BloodBath maps, before being followed where applicable by an episode 6 containing the new episode from the Plasma Pak. Cryptic Passage however is stored within its own independent INI file, with the single-player portion as episode 1 and the pack's new BloodBath maps as an episode 2 under the title "Cryptic BloodBath". These distinctions have led to some trouble when packaging all the official releases of the game together, as well as for players launching them. This is further exacerbated by the expansion's modified art files, which can be utilized using the following batch file:

BloodGDX can auto-detect the presence of the expansion and adds it into the game menu. NBlood auto-detects all INI files within its program menu, with a special entry for Cryptic Passage that handles the alternative art files. It is included within the same executable as the rest in the official Blood: Fresh Supply.

Caleb arrives at some docks (CP01: Boat Docks), which opens onto a large cave, a cabin and a lighthouse. Everything is overrun by the Cabal, and Caleb must fight his way through to a city (CP02: Old Opera House), where he enters a large opera house, which apparently is showing the "The Phantasm of the Opera". Without losing any time, Caleb goes out into a back alley and finds a library located in the midst of a forest (CP03: Gothic Library). He escapes the minions of the Cabal after recovering all the keys required to access the Lost Monastery (CP04: Lost Monastery). Once home to the "Holy Order of Carpathia", strange rituals are taking place, and Caleb ends them swiftly with his own brand of justice. The Carpathian Queen, a passing steamboat, provides escape (CP05: Steamboat), but since the Cabal owns the ship, and uses it to ship its own brand of cargo, it proves less than a gentle ride. Caleb grounds the ship and finds himself in a graveyard (CP06: Graveyard) whose relatively empty surface hides some crowded underground catacombs. If Caleb finds the proper entrance, he can reach a gloomy swamp (CPSL: Boggy Creek), where it is said Death itself drives a boat searching for unwary travelers and lost souls. Otherwise, Caleb enters a secret crypt leading to the mountains proper (CP07: Mountain Pass), where large gorges, sheer cliffs and ghosts are at every turn. Caleb moves through the mountains and into a mine (CP08: Abysmal Mine), a dark place infested with Cabal. However, it provides access to the hidden castle where an ancient path to the "otherworld" lies (CP09: Castle). Caleb ascends the stairs, and finds the antechamber of the scroll, as well as its guardian, the Lord of All Nightmares, which proves to be two Cerberi. Caleb defeats them, and then claims that which is rightfully his. 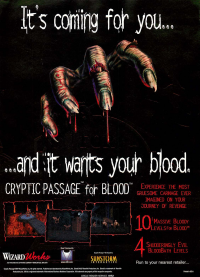 The Old School Retro Reviews blog gave the add-on a strong four out of five, praising its excellent map design, fair bundles of ammo and health supplies, and the extra BloodBath maps. The main criticism was towards the glitches.