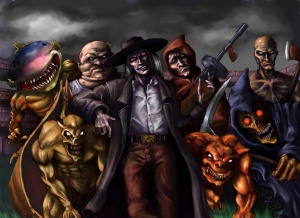 "You'll battle cultists, gargoyles, zombies, hellhounds, and an unholy host of other terrors in your quest to stop Tchernobog. You must not only defeat the Cabal--you must scour its dread name from human memory. If that means eradicating everyone and everything the Cabal has ever tainted, so be it."--Blood Website