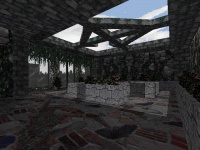 "Caleb - Scum Of Dallas, cheated by fate was mean-spirited Canadian hockey player. Rates - a risky business, especially when your favorite team lurking selling rat. That is what happened to our hero: Team Canada hockey player Adam Ace received a tempting offer to merge the final match of the World Cup in return for eternal life and sold his imperishable little soul of the famous Cabal sect. And then the sport, you ask? The fact is that tired of immortality and endless wandering Caleb found his outlet in sports betting and put all his wealth accumulated over a long time spent under the wing of fortune and a unique flair to win at the above-named miserable team. This implies another question: Kabbalah something from that? Immediately found the answer - knowing that Caleb will not forgive such Ace maple leaf bases of the country (and actually losing money), the purpose of crazed fanatics who have lost their great and mighty, track, locate and destroy our stiffs, so to speak, on live bait."--Rough translation