From Blood Wiki
(Redirected from CabalCo)
Jump to navigationJump to search

"The Cabal, the cult dedicated to the worship of the Dark God Tchernobog (Caleb's nemesis in Blood) has changed drastically over the years. No longer content to remain a disjointed army of fanatics, they have organized a corporation to front their activities. Cabalco, as it is called, has grown to hold global interests in every major economic market. The Cabal's operations extend throughout this entire corporation, even to the point of recruiting its members from Cabalco employees. Some join willingly, some not so willingly. They are everywhere, and they consider Caleb and the other Chosen to be The Great Betrayers, those that destroyed the 16th incarnation of Tchernobog. The Cabal has dedicated itself to stopping Caleb. Gideon, the current leader of the Cabal, referred to by his followers as “The Word” has been raised from childhood to lead, and views the conflict between himself and Caleb as being very personal."--Blood II: The Chosen website 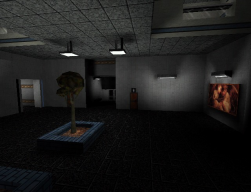 Cabalco (an almagamation of Cabal Corporation, sometimes typed "CabalCo" or "Cabal CO") is the world's largest mega-corporation, introduced in Blood II: The Chosen. The enterprise is a construct of the Cabal as a front to their activities, hiding their purpose of enslaving the world. Its leader Gideon is considered responsible for bringing the Cabal from the dark ages of ignorance into the modern world. He chose to lead the Cabal and seize power through economic and political might rather than overt bloodshed or direct conquest, although their goal still remains to stop Caleb and bring about the next incarnation of Tchernobog.

"The Cabal is a much more established group, with personality and purpose... The world is one ruled by what was only a shadow in the first game. After the Cabal attacked humanity in the first game and was rebuffed, they took a new direction. The Cabal leaders were visionary enough to see the changes coming in society, and how best to subvert them. Power would not be the deciding factor; money would be. The newly forming global economy would assure the only true control anyone would have in the chaos of the technological age would be economic control. In Blood 2, the Cabal is a world economic power, a huge mega-corporation eclipsing all others, an evil cult hiding just beneath the surface of the very fabric of society. As a result this world is a time of repression and despair, a future hopelessly caught in the past that is quickly deteriorating around them. In this way, I view Blood 2 as a tribute to Blood and the time period it was set in. We did not move forward in time to get away from Blood, but rather to romanticize the world in the way only long-term history truly can."--James Wilson III