C5L6: Caleb vs. The Nightmare 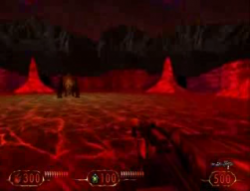 C5L6: Caleb vs. The Nightmare is the sixth and final level of the The Nightmare Levels Expansion for Blood II: The Chosen. It is set in a large open expanse, presumably in Reality Beta. There are some pillars that can be used for cover, and a meager amount of ammo caches and power-ups. This is where Caleb fights The Nightmare, the creature responsible for him jumping through time and space.

Looks like the Nightmare wants you to meet some of his pals first...

A new path has been opened. Find it, and follow it to the final battle...

The Nightmare rears its ugly head

Caleb appears in a red cave with a blood-filled crack dividing it in half. With no apparent means of escape, Caleb battles the various creatures that teleport in until, finally, an opening to a small passageway appears. Caleb walks through to find himself in a large, circular, expanse surrounded by cliffs. Various pillars surround the edges, and in the centre of the expanse Caleb finds The Nightmare.

CALEB: So, you're the thing that's been dragging me through all those rifts. Now you're going to pay. And my weenies better not be burnt when I get back, huh?

Caleb appears in an underground tunnel full of Shikari. After he slaughters them all he ventures down a path of rock and lava to a giant stone arena containing a giant dog-like demon: the Nightmare (two at higher difficulty levels). After its defeat the camera flies over a triumphant Caleb, punctuated by an end narration by Gideon.

GIDEON: And so our story comes to an end, Caleb is victorious yet again. It seems nothing can stop him. At times it is almost as if the unseen hand of some otherworldly being is guiding his actions. But it is best for me not to dwell on such things. For now I will content myself with observation. The Chosen have many adventures ahead of them -- stories to tell, battles to fight, and empires to forge. Perhaps one day, I will find a way to make my return. And on that day, I assure you, Caleb will burn!

ISHMAEL: Um... excuse me, but who took the last marshmallow?

GABRIELLA: I will kill you both if you don't shut-up!

None except those which the player took with them from C5L5: Westworld