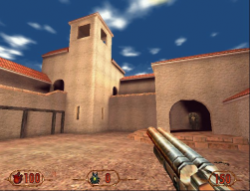 C5L5: Westworld is the fifth level of the The Nightmare Levels Expansion for Blood II: The Chosen. It is set in a western ghost town, with a Cathedral, saloon, and a final showdown in the streets (with a Behemoth). It looks like it might have been taken from Caleb's past, but there is no associated plot lines that confirm this.

You must find your way out of this place. All this religious stuff is giving you the creeps.

The town ain't big enough for anyone! Kill 'em all!

CALEB: Oh, my head. A church? Oh, this really is a Nightmare!

He rampages his way out into a ghost town, finding cultists and Beta Reality creatures. Throughout his journey, he fights the forms of the three Undead Chosen, which culminates into a showdown in the streets and then a struggle with a Behemoth. Afterwards, he finds a long mining shaft which contains something not part of this world, and descends.