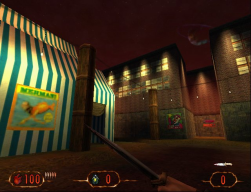 JoJo's Big Adventure
C5L3: JoJo's Big Adventure is the third level of the The Nightmare Levels Expansion for Blood II: The Chosen. It is set in a circus surrounded by "clown guards" and monsters as Ishmael tries to make an escape. It is meant to evoke the same style as Dark Carnival, one of the more popular levels from the original Blood. In order to enhance the overall feeling of unreality, two planets from the sky of Reality Beta are clearly visible throughout the entire level, even though it is supposed to be set in the real world.

Ishmael hears his summons from Tchernobog
[Video of Ishmael's cut-scene]