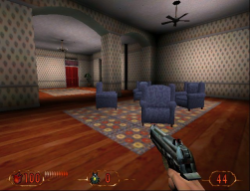 The level begins as she breaks in through the basement cellar. Destroying boxes of hair spray blows a hole in the wall allowing her to bypass a flaming gas leak. In the study on the main floor there is a key for a door in the dining room leading to the kitchens, which then provides another key. Going upstairs and out a window to the outside with the non-heart shaped pool, there is a ladder that leads into another bedroom whose door was locked. This puts Ophelia past another gas leak and allows access to the attic. After destroying a Behemoth, a vortex appears and Caleb emerges. Confused, he looks around and deduces Ophelia's secret. Embarrassed, she feebly tries to dissuade Caleb. Before more words can be exchanged, Caleb disappears through another vortex.