C4L3: The Ancient One 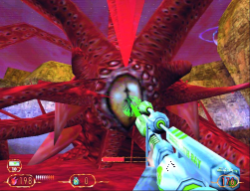 C4L3: The Ancient One is the thirty-third and final level in the game Blood II: The Chosen, and the third and last level of the fourth chapter (map name: 25_ancientone). It is the final boss fight between Caleb and The Ancient One.

Level 3: The Ancient One
DA BOSS OF BOSSES

In the words of some long-forgotten and not-so-long-winded poet: 'Kill it!'

"If you grabbed the Willpower power-up just before you ended the last level, you'll still have some of it left over. Make your way over to your left to grab another one. Then grab the Anger power-up on the other side of the Ancient One, and annihilate the bastard. The Vulcan Gun is a good choice of weapons for this job."--Baytor's Guide

Caleb defeats The Ancient One

Caleb lands in the middle of a pool of blood, surrounded by craggy rocks where bodies of Cabalco soldiers lie (along with their ammo caches). In the middle of the pool is a large blobular creature with a single eye and writhing tentacles.

Caleb fires everything he has into the Ancient One. Upon its defeat, it screams and sinks into the pool. The other Chosen appear behind Caleb.

ISHMAEL: It's not over, Caleb. You must seal the rifts. You must rebind the fabric of this reality before it tears itself apart, yes.
CALEB: I don't know nothin' about that kinda stuff.
OPHELIA: You have no choice. Listen to Ishmael, you idiot.
ISHMAEL: The power is within you. It is time you used it.
CALEB: OK, just shut up. I need to focus.

Caleb waves his arms as white sparkles of focus power fly out. Then the epilogue screen appears.

Does Caleb really close the rift? Does Ophelia get her two-minutes of gift? What the heck happened to Gabriel... er, Gabriella? What if Ishmael can't get home? And, where did he get those tattoos? Tune in next time on: As 'It burns, it burns'. Enjoy these answers and more soon... we promise. In the meantime, get into some major BLOODBATH!!

The credits display over an animation of the four chosen walking in a pool of blood.