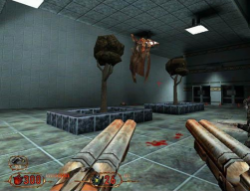 C3L4: Cabalco Enterprises is the twenty-fourth level in the game Blood II: The Chosen, and the fourth level of the third chapter (map name: 19_lobby). Caleb enters the lobby of the Cabalco office building, but has to cut the power in order to proceed to the roof.

Welcome to Checkpoint Gnarly. Ha. The security around here looks a little overly... fanatical. There's got to be an alternate entrance to the Cabalco HQ. In the meantime, it might be wise to do a bit of cleansing, and take down some unworthy opponents. Sometimes you have to make a bit of a mess to get a place clean. You're just glad that you don't have to get those gray-matter stains off of the walls. Those have to be a serious drag when they've had time to dry. Time to make your own 'unlimited-access' pass.

"Walk through the door, and make your way over to your right. You'll find two hallways (one is blocked by lasers). Enter the unblocked one and go up the stairs to the top floor. Find the door, and activate the panel to your left. Go back down the stairs, and enter the hallway that was blocked by the lasers. Walk around until you get to the elevators. The one you need is to your left. Enter it and ride it up. Note: I had some problems with this elevator. I found that I had to open the doors. Hit the switch on the outside, then quickly enter it. When it rises up to the top, I had to manually open those doors, and exit the elevator. The hallway will branch off in two directions. If you follow the hallway to your right, you can find some goodies (remember to blow up the soda machine on the way and do not go up the stairs) in some cubicles. Remember to smash the filing cabinet for a Medkit. Retrace your steps to where the hall branched off, and take the hallway to your left. Follow it down to the red doors. Enter it, and pick up the ExecAcess keycard. Now take one of the flights of stairs up, and go through the door you find up there. Go forward, and make you way through a pair of double doors. Find the small door in which 'unauthorized personal are forbidden', and enter it. Push the button to get into the lift to end the level."--Baytor's Guide