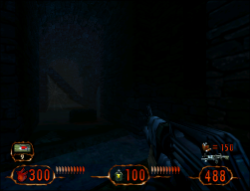 C2L9: The Underground is the last level in the second chapter of Blood II (map name: 15_crypt).  It resembles an underground crypt or tomb, and contains the first Behemoth.

Now this is more like it. Feels just like home. Makes one want to lie down and take the long sleep. Being immortal just ain't what it's cracked up to be. Far more effort then one could have expected. At least you get to help others attain what you never can. Even better, you can offer a faster assist than they could ever imagine. That's you always kindness and charitable thoughts. Time to speed their passage. Come out, come out wherever you are... you are about to be, ahem, chosen.

"Warning: There are Thieves and Hands all over the place. Follow the corridor (remember to snatch the supplies in the crypts as you go) until you get to a place where you have stairs on both sides of you. To your left is some Howitzer shells, and above you is a Stealth Power-Up (use the stairs to jump up to it). Now follow the stairs to your right until your path is blocked by rubble. Climb up over it, and follow the passage until you get to a ledge overlooking a pillared room. You should see some supplies on the right side of this room. Jump down to them and get them. The Behemoth is big & tough, and has one hell of a devastating attack. Luckily for you, he's got one of the most pathetic AI routines in this game, so he tends to get stuck on the pillars in the room. You should be able to snipe at him from your position until he's dead, without exposing yourself to any danger. A cowardly, pathetic way to defeat him, but it works. If you have an ounce of courage within you, move toward him, and he should give you one hell of a fight. Defeat him to end the Chapter."--Baytor's Guide

CALEB: Hey, this place should be giving me kickbacks.

After defeating the Behemoth, Ishmael appears in an alcove.

ISHMAEL: You're thinking about Ophelia. How very touching.
CALEB: Oh, I'll do more than that.
ISHMAEL: There is a permanent rift in Gideon's temple. It is a focus for all the damage that is being done. An epicenter, so to speak. You will find Ophelia there.
CALEB: Groovy.
ISHMAEL: Tchernobog's destruction opened many doors between the worlds. They can only be sealed by The One That Binds. That power lies within you. This reality will perish unless you restore it.
CALEB: Let it burn, I never liked this place anyway.
ISHMAEL: There is another reality forcing its way through the rifts, ancient and ravenous. It is neither good nor evil, it merely is, but it will devour us all, hm, yes.