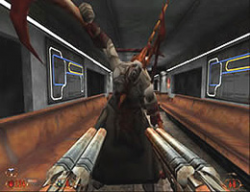 Less than impressed by the local transit system's safety record? There's only one thing to do! Destroy it! That's right, tear the mutha down. Ticket? Hell no! The only ticket you need is your boomstick. And this ticket is going to wreak havoc on the opposition. Joy in one's work is definitely a plus. Maybe it would be wise to take a moment to get out and get some stale air this time. The last couple of rides have been a little too 'close.'

== Wnto the lead car of the train. Now, all you need to do is jump onto the train in front of you, and