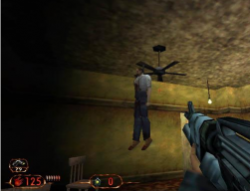 This entire section of the city is overrun, and the only way out was through the subway, which is now destroyed. Use the basement entrance in the alleyway nearby to get away.