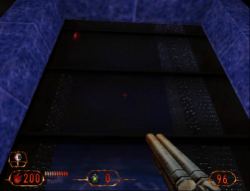 C1L7: Movin' On Up is the seventh level in the game Blood II: The Chosen (map name: 05_cdmb). It is uncharacteristically short, consisting of little else than a long elevator ride and a "boss" fight. This level was the second and final part of the Blood II demo, with the Prophet as a sort of mini-boss.

One of Gideon's personal bodyguards is near. You'll have to get through him if you want a shot at the Big Cheese.