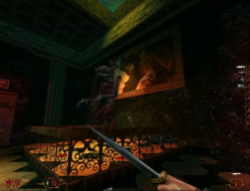 C1L3: Lafayette Museum of Antiquities is the third level in the game Blood II: The Chosen (map name: 03_museum). It represents an anthropological museum and contains the first use of the Singularity Generator, which drives the secondary plot of the drifting realities. It also premieres the first of the resurrected Chosen. Lafayette is a French name used by many American towns and institutions.

Cabalco's Lafayette Museum of Antiquities announces a new featured exhibit: Cults and Rituals. Take a remarkable and informative guided tour through the histories of some of the world's most bizarre fanatical organizations, ranging from the cursed Sect of the Barking Tree Frog to those dreaded fez-wearing Shriners. Also, do be sure to stop and sacrifice a moment of your day to visit our new Animatronic Dark God Exhibit. Scary!

Gideon's around here someplace The Cabal has this place locked up tight, though. Watch out for dangerous security measures.

Gideon's Singularity Gun had an interesting side-effect. Instead of destroying you, it brought back Gabriel. Gideon is on the run again, though. No time to waste with old friends now.

You shall be purged, The Cabal will live again!

"Turn the corner and go around to the entrance of the alley on the far side of the museum. Look up, and shoot the pipes. After the explosion, make your way up the fire escape, and use the crater of the explosion to get up into the vent. Go through the vent, and you'll find yourself next to the museum's skylight. On the far side is the Willpower Power-Up, so grab it, and jump down into the museum entrance way. As you move toward the first exhibit (a necroward), a laser trap will activate behind you. After vanquishing the ensuing ambush. Smash the glass surrounding the necroward, and carefully walk through the gaps in the laser beams to relieve the museum of one of it's prized exhibits. Now make you way to the West Wing. Again, as you go through the entrance, a laser trap will activate blocking your retreat. Enter the Wonder of Egypt exhibit and climb the stairs to your right (slashing the upper-most mummy will reveal another Willpower Power-up). Continue through the next laser trap, and through the doors into the next exhibit (note: blowing up the fire extinguisher allows you to drop through the floor into the same exhibit). Go down the stairs and through another laser trap. Enter into the Mysteries of the Occult exhibit. After foiling the ambush, activate the Animatronic Controls on the left side of the room. Tchernobog will explode (wow, it's like deja vu all over again) creating a whole in the floor. Jump down and follow the passage on the right side of the area through a door marked 'Exit.' Side Trip: In this room, you should see another door which allows you access to the storage area you saw in the previous area. Climb the stairs in the storage room, and jump up on top of the crane track. You'll see some Proximity Detonators up there. So grab them, and go back through the door. To your right, you'll find a most welcome exhibit. Seems likes everyone's favorite weapon is on display. Jump into the display and pick it up. If you like. You can blow up the soda machines and enter the bathrooms. Look around and you'll find a cultist with The Eye. Kill her, and collect your power-up. Back in the previous area, near the Shotgun exhibit, you'll find some steps leading down to another laser trap. Go through and prepare to meet an old friend. Afterwards, follow the passage on the right side of the room, and blow the fire extinguisher. Go through hole to end the level."--Baytor's Guide

Caleb attempts to go in the front way, but finds the door locked.

LOUDSPEAKER: The Lafayette Museum of Antiquities is now closed. Normal operating hours are 3 to 5 pm daily. Admission is 17 dollars. Please keep your children on a leash at all times.

He jumps to the rooftops and dives in through a skylight. He navigates through the museum, chasing after Gideon (who is projecting threats at Caleb). He finally finds him in an empty room, perched on a balcony, with a Mad Scientist, and a Prophet holding a strange gun.

GIDEON: Time to die, Chosen one.

The Prophet fires the gun, which fires a laser and creates a large purple and black vortex. From out of the vortex emerges a large, African-American woman in metal body armor. She looks around, confused and disoriented.

GABRIELLA: What the hell is dis?
MAD SCIENTIST: That's unexpected. Hmm, I guess I'll need to recalibrate the singularity settings.
GABRIELLA: Caleb?
CALEB: Gabriel?
GABRIELLA: Gabriella. It's a long story.
CALEB: Save it for someone who cares.
GABRIELLA: Is that any way to greet an old friend?
CALEB: Things have changed, but I don't need to tell you that.
GABRIELLA: I need to go with you, find out what's goin' on.
CALEB: You're not my type.
GABRIELLA: Huh, looked in the mirror lately? You're no catch yourself.

The vortex reopens and Gabriella disappears through it. In the confusion, Gideon and his posse have escaped. Caleb continues the pursuit and finds an exhibit that contains his old reliable - the Sawed-Off Shotgun. He picks it up and moves on.

Caleb activates the animatronic "Dark God" exhibit. It starts to move, then malfunctions, and explodes, revealing a hole in the floor that Caleb uses to escape through an underground tunnel.