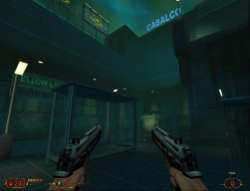 C1L2: Pickman St. Station is the second level in the game Blood II: The Chosen (map name: 02_cityhub). It represents an urban area with such implements as a laudromat, hotel, and dilapidated housing.

That hurt. That hurt a lot. The last time you blacked out, it was after throwing back nineteen consecutive shots of JoJo's Black Label #47, and even then, you think your physical proximity to the ice-cream stand you blew up had more to do with it. Ah, well. That idiot vendor shouldn't have pissed you off by putting sprinkles on your Killer Kiddy Kone. Speaking of sprinkles, you suspect it would behoove you to find Gideon and liberally sprinkle him on the nearest wall!

Gideon's ruined your commute, and now he's running like a coward. Are you gonna stand for that? Follow him to the museum and give him what he deserves. Look out for his cronies along the way.

The trashcans on the opposite ledge contain some goodies. Try to jump over there and get 'em! (Jumping while in run mode will lengthen your jump.)

Your jumping skills paid off! You found a flashlight. Locate it in your inventory and try it out. It will come in handy when you come across a dark area.

Try out this Mac-10 on those targets. Notice how you will get a more precise shot with the alternate fire mode. Most weapons in Blood 2 have an "alt-fire".

There's an ally nearby that would make a great shortcut to the museum. Might take some exploration to find it, though.

Answer the phone by pressing your use key on it. Many objects in Blood 2 can be activated with your use key.

That looks like the ally you need! Seems you'll have to do some skilled jumping to get there.

What is this, the freakin' Olympics?[edit]

The museum lies straight through this passage, but it looks like the City has been thoughtful enough to block your way with dumpsters. This will take some tricky moves...

"Remember to smash all garbage cans, trash bags, and crates on this level. They often contain useful items. Go around the metal fence, and go up the escalators on your left. After the third set, you'll set some garbage cans on a ledge to your left which contain some goodies. Jump over and collect them, then jump back. Continue down the path until you find yourself outside 'Crazy Eric's Guns and Ammo.' Jump into the garbage bin to the right of the entrance to pick up a flashlight, then enter the store. Go into the back room, but before you go up the stairs, enter the room to you left. There, you'll find the target range with a new toy. Pick it up, and then go up the stair in the other room. Make your your way around the second floor of the shop, and down another flight of stairs. You should soon find yourself in front of an open sewer. Before you jump into it, head over to the Laundromat (jump into the dumpster to the right of the entrance for a couple of remotes). Aside from a gag or two, the only thing of interest in the Laundromat is the washer with the body in it. Smash it, and you'll be rewarded with a Life Seed. Go back outside and jump into the inviting waters of the sewer. Follow the tunnel into the next area, and jump out. Go up the stairs and jump up on top of the over-turned dumpster (you'll find some flares inside of it, so pick 'em up), then up onto the ledge, and over the fence. Follow the alley around until you get to the fire escape. Climb up to the second story (the third story contains some flares) and jump over the fence into the dilapidated playground. On the other side of it, jump up on the dumpster and over the fence to end the level."--Baytor's Guide

After the subway crashes, Caleb finds himself on the train tracks near a train platform. Several innocents are scattered around, waiting for the train.

Caleb pursues Gideon up a flight of stairs where they confront each other.

GIDEON: Don't have much luck with trains, do you?
CALEB:You just made your second mistake... you stuck around.
GIDEON: Oh really. What was my first mistake?
CALEB: Letting me live.


Caleb pursues Gideon to the Lafayette Museum of Antiquities. 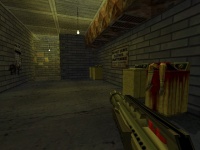