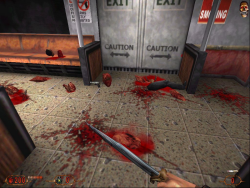 C1L1: Cabalco Transit System is the first level in the game Blood II: The Chosen (map name: 01_subwaya).  It is where the game story starts, and the first point where the player takes control of Caleb.

You just can't sit and enjoy your new issue of Guns N' Gibs while suffering the subway in peace these days. First that ticket guy dared to confiscate yer flask of Ol' Red '99, and then that spineless conductor had to stop the train for an hour just because some snot-nose brat in a baby carriage rolled onto the tracks! You were about to go up there and give him a piece of his own mind but then you recognized his voice... and realized that your day was about to get... interesting.

The daily commute is about to get a little bloody.

This is Gideon, your guest conductor...

"This level shouldn't shouldn't present any problem. In case you never played a game with a "Use" key, you must press it to open the doors between the subway cars. And remember that the civilians often contain Life Essences, so take out your knife and slash away. Just make your way to the front of the train, and the train will crash ending the level."--Baytor's Guide

The camera flies over Gideon inside the conductor's booth of a moving subway car.

GIDEON: This is Gideon, your guest conductor. Hold on tight. The ride might get a little... bloody.

The camera moves to the interior of the car, and zooms in on Caleb.

CALEB: Bring it on.

You start at the back of a subway.

Move straight through the subway doors, killing Cultists along the way. At the end of the train, you will find an abandoned control center. At this point the subway will ram into another and derail, and the level will end.

CALEB: End of the line.