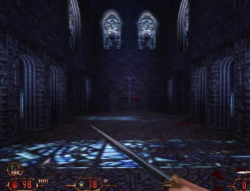 C1L11: The Cathedral is the eleventh level in the game Blood II: The Chosen (map name: 07_cathedral). It resembles an old Catholic cathedral that is breaking apart or under construction. In the basement, Caleb meets the first boss of the game.

You won't find any nuns in this cathedral! The resident lurker-from-beyond has warped this place into something more to its liking. You might actually find it habitable yourself, if it was up for sale (at a reasonable price), and didn't come with those annoying Cabal doormen. Ah, well. It's time to clean this place out and find out where Gideon's gone. Maybe you'll find time to get a lovely stone rubbing for that empty wall in your walk-in gun-closet while you're at it.

Yep, this place could use a good exorcism! Maybe you'll also found out more about what Gideon's up to.

"Go up the steps and enter the stone door. Walk around the wall and through another stone door. Turn to your left and go through the door. To your left is a door leading to a pair of IR goggles and a Zealot, and probably not worth the trouble. Take the door to your right, and pick up the Apse Key. Backtrack to the room with all the Stained glass, and go through the door across the hall. To your right is a room with some Soul Drudges (no goodies). Take the door to your left and go up the stairs. Jump through the hole in the wall onto the ledge. Look down. You'll see a hole in the wall next to a pool. There's a couple of Bone Leaches in the pool, so you might want to take care of them. A little later on, you might find yourself in that pool, and you don't want to have to deal with them then. Jump down, and go through the hole. Go around the corner, pick up the Tower Key, and go back to the room with the pool. Make your way to the top of the tower--make sure to grab the Life Seed on the other side. Tip: When you get near the top, you'll find yourself ambushed by a couple of Zealots. The best course of action is to drop down into the pool (see, there was reason to take out those Bone Leaches), and take them out where you have a little room to maneuver. Jump through the hole at the top. Climb the stairs and go through the door. Jump across the broken ledge, and go through the door. After going through another door, jump out through the hole. This next bit is really, really evil, since you'll be navigating narrow ledges, while Fanatics and Zealots ambush you. A few tips. The first: you might want to turn your auto-run off, as precision is much more desirable than speed here. The second: there's at least one Zealot you can take out with a bomb. And lastly: when you get through the end, discretion can be the better part of valor--you can probably zip by the last Zealot or two without having to take them out. Follow the ledge to your left until you find the slope leading down to the next building. There should be a small out-cropping to the right of the slope (facing the other building), and you might want to drop a proxy or two there (drop a couple of remotes if you're out of proxies), as a Zealot will teleport on that spot a little later on. Slide down the slope, and carefully jump from ledge to ledge until you eventually come to another slope. This one will have a hole underneath it. Jump onto the ledge by the hole, re-enter the cathedral through the hole, and go down the stairs. Quick-save. If you look through the hole at the bottom of the stairs, you'll see a couple of Shikari, and some very inviting items on the ledge across the way. If you want to get those items, then you'll have to get them before you kill both of the Shikari--when you kill the second one, the big boss will warp in, and you'll probably find it impossible to get up to the ledge. Kill one of the Shikari, and drop down. Pick up the Necroward and Life Seed on the lower level, then jump up to the ledge to get the items. After picking up the Anger Power-Up, quickly kill Shikari and prepare for one Hell of a fight. Whatever you do, do not leave the sight of the monster. If you do, it will pound the floor causing debris to fall and injure you, so you can't hide. Instead, you'll have to keep moving launching everything you possible can at it. The grenades from the Assault Rifle will come in handy. Try to do as much damage as you can while the Triple Damage of the Anger Power-up is active, but remember to KEEP MOVING."--Baytor's Guide

Caleb descends into the basement where a giant portal opens up. The Naga enters the room and Caleb defeats it. Moments later, the back wall explodes, and Gabriella stands there on the adjacent train tracks.

GABRIELLA: Someone's got to hold de train. Dese tings are everywhere out dere. The Cabal must be pretty desperate to be creatin' such creatures.
CALEB: These aren't Cabal.
GABRIELLA: Den what are dey?
CALEB: Hell if I know. What do you care? You don't seem to be havin' any problems with them.
GABRIELLA: I don' have problems. I solve them.
CALEB: What's that supposed to mean?
GABRIELLA: I'm not sure I can count on you anymore. This is becomin' a bad situation. If you can't solve it, I will.
CALEB: I will... solve it.