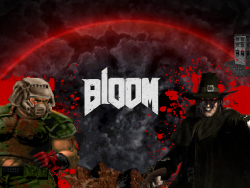 BlooM is a Total Conversion  Mod for GZDoom and Zandronum compatible source ports, created by Bloom Team: Antonio Gonzalez Aguilar (Drugod), Roberto Julio Alamo (Rolls3D) and Virgilio Virzo (Ozymandias81). It is designed to bring all of the enemies weapons and environment elements from Blood to the Doom universe, forked from ZBloodX, mixing it and creating a total crossover between the two universes.