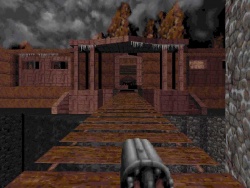 "After Caleb's successful defeat of Tchernobog, he retires to Los Roma, a sleepy little town in his home state of Texas, where the only dead animal is the one on his dinner plate. He is sick of fighting, tired of bloodshed. But as he spends his days building up a ranch, there is activity beneath the ground of Los Roma. At first there are only tremors, and the townspeople shrug their shoulders before going on as usual. But soon, strange sounds begin to emanate from the town church. Hellish sounds that lift the hair on Caleb's neck, and grip his cojones with iron-tight fear. His old life, he knows, is returning."--Team BANZAI

Banazai's Add-On (also known as Caleb's Revenge and previously Game Leader's Unofficial Add-On) is a single episode fan add-on for Blood featuring seven levels, last updated on November 9, 1998 by Team BANZAI. Partly to facilitate its final release and to lower the download size in the days of largely dial-up connections, it features only new levels and does not contain any new textures, weapons or monsters. It is compatible with either the original retail release or use of the Plasma Pak through separate batch files. In addition, the archive contains a document featuring the game's story, and another featuring a strategy guide/walkthrough.

Following his victory at the Hall of the Epiphany, Caleb has grown tired of bloodshed and retires to peacefully build a ranch nearby the sleepy Texas town of Los Roma. For seven months all is quiet and restful, before the nightmare began with strange sounds emanating from the local church. Caleb prepares his armoury for action.

Finally beasts, zombies and cultists pour out into the town, savaging the fleeing townsfolk, polluting the river and torching the buildings. Caleb fights valiantly, but he has become out of practice and is captured. Brought to the now deserted main-street Paulo, Caleb is interrogated by Tchernobog channelled through a gargoyle. Having survived their last encounter, the god tells Caleb that He intends to leave him to suffer as Tchernobog retreats to hibernate over the next century.

Locked in a mausoleum atop the town cemetery, Caleb cowers overcome on a tomb as the undead eye him hungrily. Finally he recovers enough to coalesce his thoughts, and realizes that implicit in Tchernobog's message is an admission of weakness, and that Caleb must hunt the god out to His hideaway at a monastery in the Sierra Madre mountains before He can revive. Caleb vows to stop the Cabal once and for all before more towns like Los Roma fall.

Caleb awakens and immediately dispatches two axe zombies, he then fights a further legion of undead and Cabalists before heading into town, snatching a key from the now poisoned river (narrowly avoiding a closing gate). He then proceeds to raid a hotel, a vault, pub and book-store, as well as exploring some winding forest paths, before entering the now accursed church (G1M1: Caleb's Tomb).

Once inside, Caleb immediately finds the tunnel by which the Cabal encroached upon his home and descends down into the intricately cavernous depths adjacent to the underground river, seemingly being toxified by an immense subterranean creature. Finally he raids a fortress cleaved into the rock, grabbing the necessary keys and outrunning a torrent of flame. This allows him to open the gate at the bottom of the stream, tossing him down into the abyss. (G1M2: Passage to Hell)

Landing in a pit of flame, Caleb traverses lava beds mixed with groundwater, before eventually ascending a stone spire back to the surface (G1M3: Hell's Kitchen). Entering a forgotten edifice, Caleb faces trials of fire and water to unlock the way forward (G1M4: Ancient Palace). This brings him up the mountainside wherein he discovers a monastery, and must then find the right sequence of switches to open up its winding stairways and balconies (G1M5: The Monastery).

Ascending the peak further, Caleb happens upon a mining complex where he again faces trials of ice and flame, defeating a number of spider queens. Robbing a key from a tomb filled with rats and the undead, Caleb enters a small town signed "Hell is Here" wherein the final battle with Tchernobog awaits him (G1M6: Darkwinter).

"As Head level designer I would like to say it’s been a pleasure working with all whom participated large and small to this project. Many members came and went and long delays have plagued this from the start but a quality end product has evolved from it. New art and other ideas have been cut from this project but in the end the download size and simplicity of adding this episode to your existing Blood game have made these cuts acceptable. Thanks everyone."--Steve Graehl

Also known as Nailer and aged 36 at the time from Minden, Nevada, United States. Head level designer and creator of G1M1: Caleb's Tomb and G1M7: The Damn Dam.

"Head Level Assistant and designer of maps 2 and 5 and many adds to level 3. Without his help, enthusiasm and map editing skill this project would no doubt died: Justin “Jet” Otto of New Zealand."--Official website

Level designer aged 27 at the time, author of G1M2: Passage to Hell and G1M5: The Monastery, and creator of effects and player sounds.

"Level Designer map 6, the ending boss level and the only guy employed by a software company: John “KASAI” Leonard of Tokyo, Japan."--Official website

Also known as Kasai, and from Tokyo, Japan. Creator of G1M6: Darkwinter. Worked on Wanton Destruction for Shadow Warrior by Sunstorm Interactive.

Real name Anton and then aged 18. A mapper from Krasnodar, Russia. Creator of G1M4: Ancient Palace.

"Original project leader and the guy who brought the original team members together: Arjan van Rossin and the pages at GameLeader.com"--Official website

Mapper from Leiden, Netherlands and original founder of the project. Then aged 20.

A mapper from Sudbury, Ontario, Canada who was only thirteen at the time of the add-on's releases. Creator of G1M3: Hell's Kitchen. He was also working on a later cancelled level called "The Underground Fortress".

Beta tester from Sweden; also developer of Eye of the Blood.

"Hi, just thought I'd let you know we really like your add-on. Great (make that really great) level design, and most of all, great fun :) I've had a fantastic day today, being able to play your maps while d/loading the B2 demo. Thanks again for the great maps, and good luck in any future projects! Hope you get lots of good compliments on a job well done... you all deserve it."--Joel "Reactor" Blackwell

"I'm only on the secret level but from what I've played so far, this is by far the best Blood Add-on here [on Mod DB]. Some superb level design given the limitations of the Build Engine. I also love the inclusion of the strategy guide. Thanks for sharing this fantastic episode for all to enjoy."--xanadu323

"just played it and completed it. It was alot of fun and had a great flow, just loved starting off in another graveyard. The temple map, I believe map 4 is incredible. I checked the readme and each map was made by a different person. Wya to coordinate your efforts."--Billyclub

"An excellent addon clearly done by someone who loved the game and all it's original themes. Well worth a look."--RedFanatic

"An excellent first outing for the Blood mapping community, this is a release that stands the test of time. Personally I am partial to the more conventional maps like G1M4: Ancient Palace or G1M1: Caleb's Tomb than say the more abstract G1M3: Hell's Kitchen, but that is a matter of taste. Also perhaps a touch too generous with the ammunition, but all the same it offers up some unique challenges. I also like the bountiful use of Caleb quips. A must play."--Graham "Gideon" Wilson, Blood Wiki