"This long range, fast-firing and extremely damaging weapon is the ideal choice for heavy machine guns. It is equipped with an under-barrel grenade launcher."--Blood II: The Chosen Manual 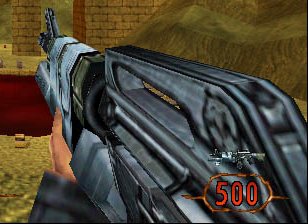 The Assault Rifle is a weapon in Blood II: The Chosen. It functions much like the Submachine Gun, but is far more accurate and has a higher rate of fire and better damage. It's particularly useful due to secondary functionality as a grenade launcher. This is the primary weapon of Fanatics.

"An Assault Rifle... for when you absolutely, positively have to kill every damn person in the room! Accept no substitutes!"--Caleb