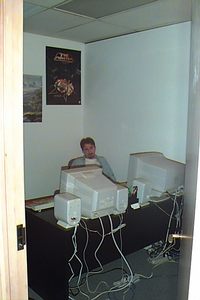 "I figured I was on a roll with engineers, so I headed over to Andy Mattingly's office. Andy is working on programming the B2 interface, which is looking really cool. This is really where the tires hit the road. Nothing makes a game feel more solid than a strong interface, and Andy has really delivered in this area. Sorry I didn't make more fun of him, but he's new to the team, so I figured I should go easy on him. :)"
--James Wilson III, Blood II Development Updates: Week One

Andrew "Andy" Mattingly was an engineer on Blood II: The Chosen specializing on special effects, and described as "Quiet, but Deadly" in the game's credits.