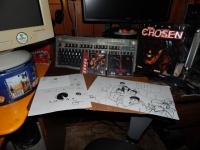 Sitting on my desk

This has been a year of long sought after recognition for the Blood community. After years of waiting the franchise will finally have its first new official instalment in the form of the upcoming Blood remaster by Night Dive Studios, which Atari has at long last found within its grace to bless with their backing. Samuel "Kaiser" Villarreal's effort is far from the first attempt to remaster the game, with Alexander "M210" Makarov's BloodGDX among many other fan made projects having already born some fruit, but it is the first to be able to operate within the limelight of full commercial recognition, even if access to the Blood source code still remains as largely elusive as ever. By giving the project their blessing Atari has also revealed that the rights situation may in fact be even murkier than previously thought, but we are now at least going to have a new Blood release emerge from the swamp in spite of it. 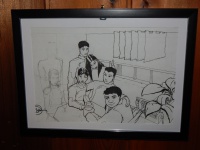 Hanging on my wall

The Blood Wiki also received acknowledgement in a very different way this past year. A couple of months back I got an email from Mark Jessup, the marketing manager over at Monolith Productions. As part of their Shogo 20th Anniversary live-stream in September, part of a wider celebration of the game's birthday shared on the company's Facebook page, they were giving out signed concept art. What we did not know then was that they had also apparently reserved some pieces for us over at the Blood Wiki to show their appreciation for our work. Earlier I had taken one of the previously unseen concept art pieces, that of "the Shogo family ... in quieter times", and given it a vectored make over. Thanks to Mark as well as the concept art's creator Matt Allen, I now have the original freshly signed art framed and hanging on my wall.

They even included a collection of concept logo sketches alongside the main piece that I am still meaning to scan and share whenever I can find the will to get around to it. As part of his last missive to us, Mark was also kind of enough to say that if there was anything he could do for both the Blood and Shogo communities, all we had to do was ask. "Outside of making a sequel, of course. That’s unfortunately not going to happen." Given how many requests he has had to field from those wanting a new Blood, or a new Shogo, No One Lives Forever, or even Claw, I can not say that I blame him for his need to stress that part. Who knows who can even authorize such a venture now, with even Atari demurring on owning the full legal rights to the game's intellectual property at present. It is still a lovely dream though, and one the Blood Wiki is more than happy to help keep alive. Tchernobog (talk) 15:44, 12 January 2019 (GMT)

Hmm... this promises to be fun!

2017 heralded a new dawn for Blood in the form of BloodGDX, and 2018 has set the stage for a 2019 to even make that seem trivial. Night Dive Studios is bringing Blood back for modern systems, and it will be properly legal this time, with the blessing of Atari. On the unofficial front also there is word of a new contender, NBlood, ready to vie for M210's crown. The ingenuity of these Russian hackers never ceases to amaze me. More interestingly, NBlood author Nuke.YKT has just given me word of his intention of releasing the source code to his project when he is done, which will mean we will finally have a publicly available source code to something that is almost if not entirely (un)like Blood... cool stuff. To think that just a few years ago all we had to go on were Dosbox or total conversions/recreations such as Transfusion, ZBlood and BloodCM. Now by year's end we might have three more direct options to play the game, with one of them even protected from cease-and-desist via an official license! I can honestly say that at the start of 2017 I would not have anticipated such a thing, with efforts such as BloodXL and Build Sharp at best existing in the murky edges of this dimension, and the now anointed Blood EX seeming only as likely as Kaiser's copyright bending gumption. 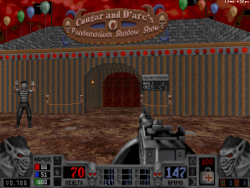 One of the best things about this new era of source ports, as all the YouTube videos I have seen indicates, is that there is now no better time to indulge in the output of our inspired mapping and add-on community. I had always intended to partake more than I had, and indeed I had managed to claw my way through the original version of Death Wish and Rage Against the Machine via Dosbox, but BloodGDX has finally given me the ability to conveniently explore some more. Our articles for Banzai's Add-On, Bloody Pulp Fiction and French Meat (currently my favourite add-on) have now all been properly detailed. The updated Death Wish, just re-released with the new multiplayer features of GDX and presumably the up-coming ports as well in mind, is next on my to-do list. It is how I personally intend on breaking in the new remaster, so I guess maybe Legends of the Iconoclast should be my NBlood project? Well, we shall see. I even have started up efforts to document the individual custom levels from add-ons ala Doom Wiki, with drafts done for Banzai, RATM and French Meat, among numerous other little notes and sections on the topic I have added this year. Given all that Blood has been through, it is astounding that we have such a rich vein of custom content as we do, and things are only looking brighter. 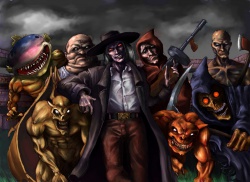 Other major projects of the year has been an revamping of our expansive fan art image gallery, bringing in a bunch of images over from DeviantART and Blood Thirsters (as well as demarcating our featured artwork). I also overhauled our coverage of Doom engine Blood fan projects as well as our List of Mods article in general, most notably bringing in Mr. Froz to expand upon his game Blood: Dead on Arrival. Early in the year I also started yet another major re-design for our Blood on YouTube article, which has always been one of our harder beasts to tame. This included reviving the Stick Figure Animations videos. This year I plan on trying to notably improve our level articles, as well as maybe finally finishing drafts I started for a Shogo Development article a few years back (hey, we actually have first-hand development artefacts now!). I also really enjoyed us all getting together for another Halloween Bloodbath, even if attendance could have been a bit better (must spread the word further this year!). I would also just like to note that Firefox keeps arbitrarily logging me out and blocking my login, so my listed edits this year is probably only a fraction of my total. Not that I have much competition. Anyhow, have a blood infused 2019 everybody! Gideon (talk) 19:52, 12 January 2019 (GMT)